There is one universal truth that needs to be widely acknowledged: the “domestic goddess” is a myth and has been created by generations of advertising to keep us feeling guilty or striving to attain that not-a-hair-out-of-place apron clad image. With lipstick on.

I deduced this yesterday after chasing my beloved toddler around the house whilst he had whisk clenched between his teeth. And he ran gleefully. Managing to have dinner bought and ready to throw in the oven (a customised bought-at-store pizza) and wine- was a feat not dissimilar to the crossing of the Rubicon. And the whole time I felt horribly guilty that I hadn’t managed to do most of the things on my on-leave list. Though I really can’t complain as every moment with my son, whilst exhausting at times, has been an utter joy- lots of giggles, tickles, cuddles and laughing. 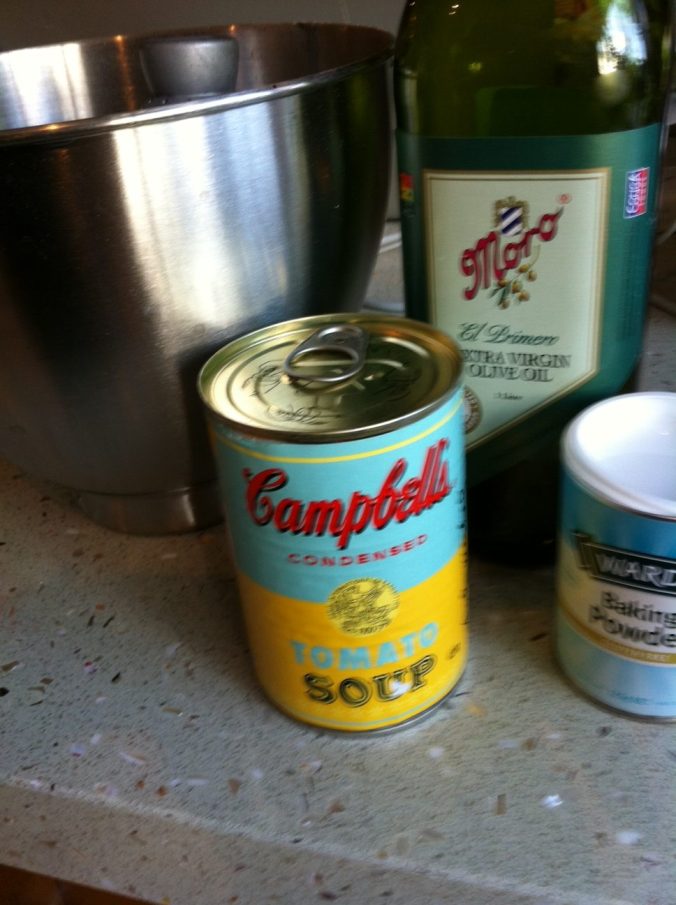 To assauge my guilty lousy-housewife feelings, I decided that today I would bake a 50s chocolate cake. I had read about a rather unusual recipe at the following midcentury cooking blog. Did I mention the mystery ingredient was tinned tomato soup?? Today, it seemed was the day, The trick was to mix everything and get it all in the oven before my husband even left for work.

In the pan it doesn’t look any different from any other chocolate cake batter. I added the tomato soup last and didn’t notice any horrible horrible smells, though I admit I was hesitant to lick the batter from the spoon!

So, given my recent deduction about the myth of the Domestic Goddess, it really is o surprise that I love the fashion and style of Claire McCardell. McCardell, who is often considered as sort of anti-Dior was really doing what Dior was doing but in a different way- both designers wanted to make women look and feel beautiful. McCardell just pitched her designs at women in the home (if you haven’t ever seen the infamous Popover dress, here it is) while Dior was all about constructing the form with corsets and corselets in the ilk of his feminine ideal.

Who did women of the time really want to be? Did they want to be trying so hard to look like a swan with that serene, slightly disinterested gaze and wistful smile sported so often by the prolific and loved 50s model, Dovima? Or did they want to wake up in the morning, put the coffee on and feel somewhat NORMAL as they grabbed a go to dress that flattered them somewhat as they went through their day trying to sane with life’s demands? Well, as a time poor mummy, I obviously fall into the latter category. I often don’t have time to wear make up at home, I haven’t really done my nails since my son was born but I still enjoy clothes. I need easy wash, easy wear. This was so much of what McCardell was about and it seems her philosophy is still relevant today.

Today’s pattern is Vogue 5044, not a McCardell deisgn but almost identical to a dress that she produced in the 1953 which differed only be the inclusion of slash pockets at the hip (featured on page 110 of Yohannan and Nolf’s book “Claire McCardell: redefining Modernism”. The pattern was produced by Vogue in 1960, by which time McCardell’s designs had obviously had time to gel in the psyche of popular culture. I often thing that pattern companies tend to cater for interests rather than create the demand. But that theme is pretty consistent with other known published thesis on popular culture…

Anyway, enjoy. There is a cake coolling and a little boy who wants to play…!

I have decided to do a full week of knitting patterns as I have spent the last week sorting through them and picking out designs for my etsy shop. This is one of my favourites, produced in Australia during World War II. Quite apart from the era, I also love Hawaii and the style of this sweater is gorgeous. The colour palette chosen for the advert is very retro… but so sensational! I want one!!! 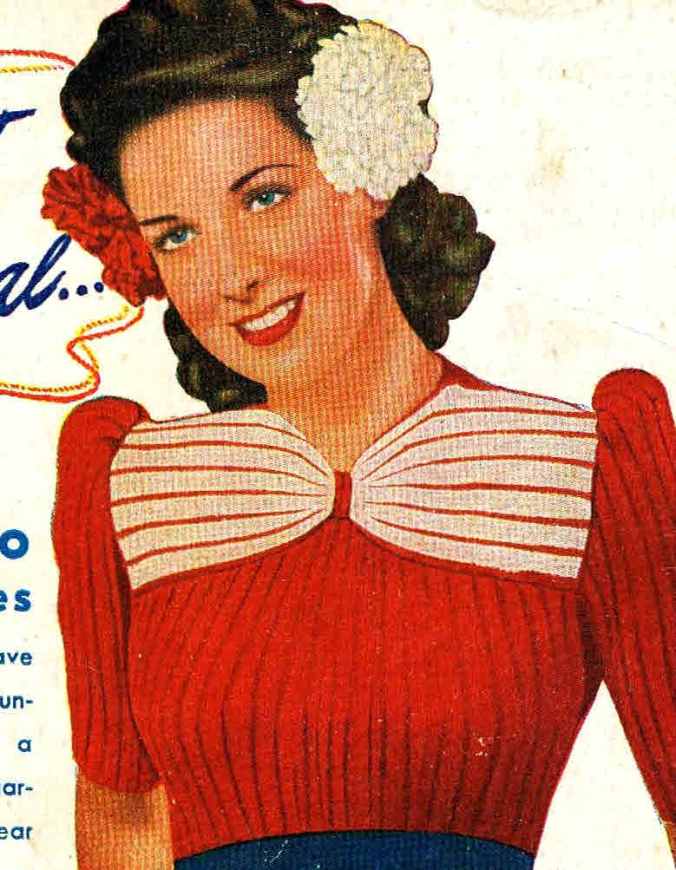 The design in my pattern book is actually black and white but I found this beautiful colour rendition in a 1940s women’s magazine. Enjoy!

This is another 40s knitting pattern I really like… so forward and modern for the times! This one was also published in Australia during World War II. Love the flattering ribbed waists in a lot of these designs.

This morning I am packing hubbie and bub into the car and we are going shopping for bargains on a country town about an hour away… with brunch along the way. A mini adventure so to speak! If only I would find more pretty patterns….

There has been a great interest of late in 50s and 60s fashions with the airing of MAD MEN, but I must admit, I also adore some of the designs which were fashionable in the 1940s. As such todays pattern is a 1940s knitting pattern produced in Australia. Oh, two patterns, why not!  If your  ever read my blog, you’ll be aware I love both sewing and knitting (though I have been putting myself through a few courses online of late to learn couture sewing).

But back in the day, knitting was an equally important skill, trade for cheap machine made knitted garments isn’t what it is today. I generally only sell 40s and 50s designs at my etsy store (VanessaLovesVintage) because of Australian copyright laws. If you see someone selling Australian reproduction sewing or digital knitting patterns post 1955, I’d say be careful, they may knowingly or unknowingly be in breach of Aussie copyright law.

Anyhooo… here are two patterns today… shameless plug, they are both available in epattern format at my etsy store! “Cherry on top” is one of my favourites… as soon as Little Prince is a bit older I plan to get this one on the needles… well, I hope so anyway! 😉 I like the buttons on the shoulder on the second design… I think the feature at the neckline is nice too, doesn’t make it toooooo much lace and provides a bit of a focal point…. What do you think?!? 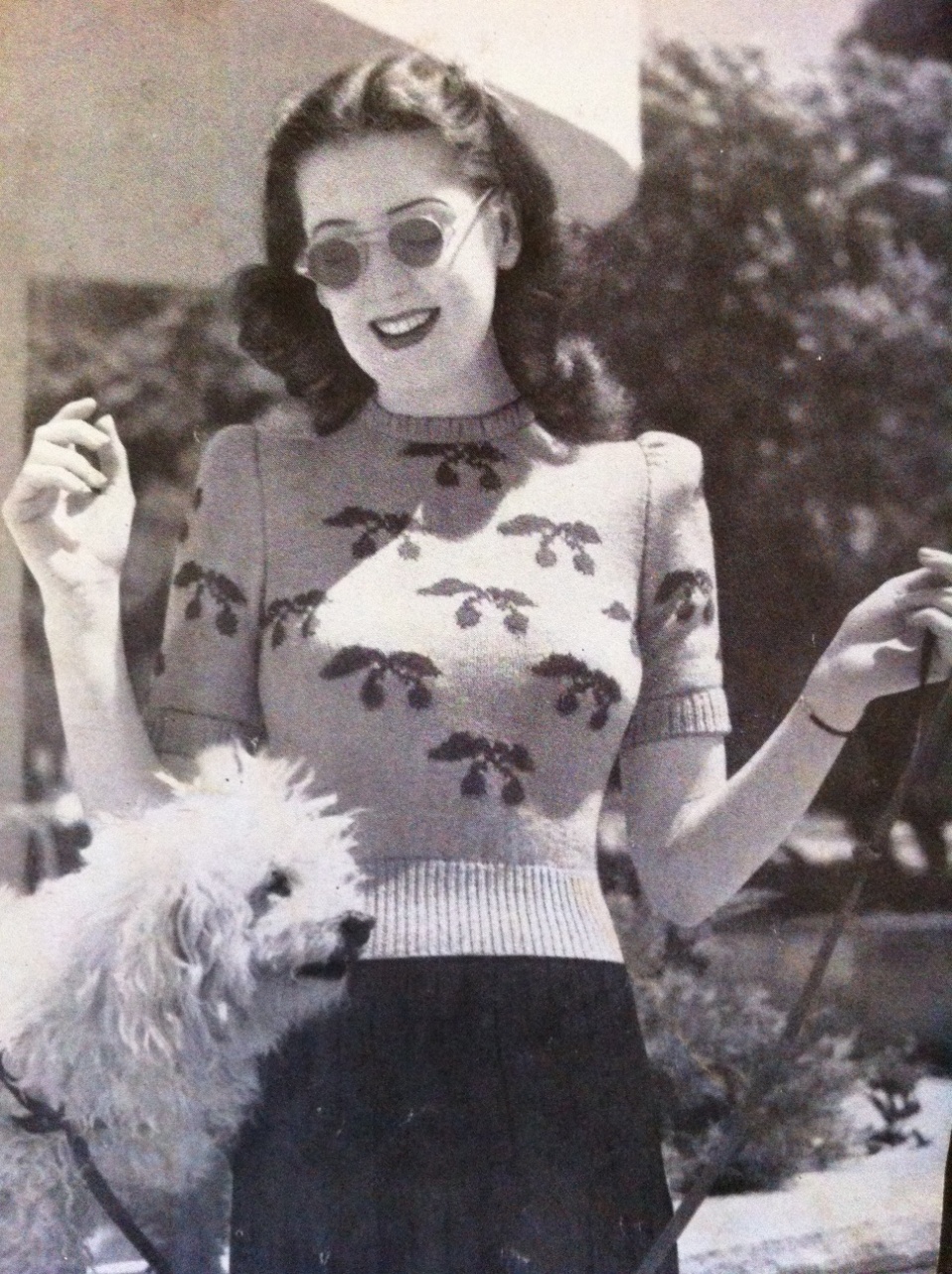 Yesterday I posted about the sewing process. I asked my mother what her cutting tip would be. She answerred “Carpenters say, measure twice and cut once. In sewing I always measure several times before cutting!” I thought this was an interesting statement as it reflects my paranoia in erroneously cutting up gorgeous fabric. This perhaps another important point empasized by Marian Corey… DO NOT RUSH. Sometimes difficult when you want to see the fruit of your labour take shape NOW!  (Says I smiling).

1940s Butterick 4523... the perfect dress for a Sunday drive, family picnic, night of card playing or a stroll with the girls in town...

Todays pattern is in keeping with yesterdays 1940s Butterick theme… a pretty strapless sundress with a lovely bow that ties at the bodice. Pretty, pretty.

When I look at patterns like this it amazes me to think about what life must have been like at the time they were produced. No emails, mobile phones, iPads or internet… And even those things weren’t really around when I was growing up. These were the fashions of my grandmothers day.  My dad was born in the forties and used to tell me about being packed in the car for weekend car trips. This strikes me as the perfect Sunday drive date dress! Again, I think it would be fabulous in a fun Liberty tana lawn print.

“New vintage” sounds like a contradiction in terms… and yet, what else can one call a “new” factory folded pattern from 1945? Today sharing two patterns I love, not because the design details are so indicative of the eras in which they were produced, but because I can’t help imagining the place the world was when their first owners cast their eyes over the “latest” fashions. The considerations for ones choice of dress would have been totally different, ie. wartime fabric availability.

Bub and I journeyed out this afternoon to the National Library and to my surprise, he fell a sleep! This left me with a bit of browsing time and I was glad for it having requested a preview of Marian Corey’s “McCalls Complete Book of Dressmaking” published in 1954. The book had some great ideas on interfacing that could be used to stabilise different fabrics.

– When basting, use silk thread, it won’t leave holes when pressing the garment;

– Baste the entire garment and try it on BEFORE finally zipping it through a machine;

– If pins are used to secure the pattern when cutting the fabric, always pin ALONG the grain, not in the shape of the pattern;

– DO NOT RUSH a sewing project; (can this ever be heard enough)???

The last piece of advice is reminiscent of advice given in Vogue’s New Book for Better Sewing. Today I finally received the professionally digitised, colour copy of the latter book which cost an arm and a leg but that I am sharing with others on etsy through my new online shop, VanessaLovesVintage. The book is a hens tooth, and prior to obtaining my own copy through a specialist bookseller, I was reliant on the copy held at the National Library. It would have been marvellous to just order a digital copy on CD!

Well, the darling bub stirs… And there is yet more reading to be done! But what an interesting day!